Sittangbad - the layout that launched a thousand games

Last weekend, as many of you will know, Laurence and Tricks celebrated the many Partizan wargame shows by sharing, along with others, many photos and other 'stuff' from the past. You see, it was due to be the Partizan show on Sunday, but of course...

Henry Hyde did a mammoth video piece on YouTube all about the Sittangbad and Mollwitz games we created and displayed in 2006 and 2007 at Partizan.

It got me all misty eyed, particularly about the Sittangbad layout.
In many ways, it was the terrain design that launched a thousand games since then. 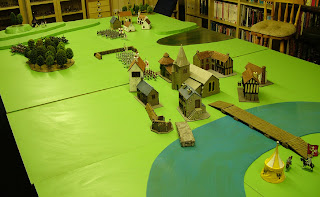 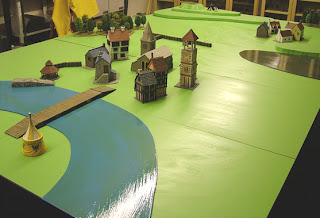 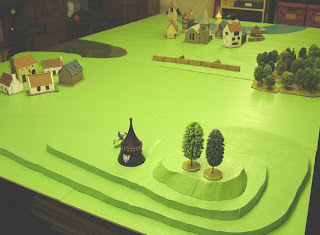 I remember coming up with the design, the green boards, the place on terrain, and so on, and wondering what the Wargames world would think of it.
Up till that point, whilst I had held this vision in my head for quite some time, there wasn't really a 'classic' / 'old school'  look out there.
I'm delighted that this particular vision has been taken on and seems to be the 'go to' look for bloggers in the old school genre.

The full story of the Sittangbad game was on my old Warcabinet website where I did regular updates which were the. Collated into an article for Battlegames magazine.
If you'd like the shortened version, click on the Sittangbad tab above and go to that page.

It's a funny thing Phil, but when you get something spot on it is simply accepted. I don't remember leaping around the hall with praise for your table, I just accepted that you had so perfectly reproduced the essence of what we were all thinking. Similarly people have just accepted that is what a classic wargame looks like even though it was not what Don Featherstone or Peter Gilder were doing.

Looking at it now again, it is a brilliant creation, well done indeed. Like you Henry brought back a wealth of memories over the weekend with his podcast though I cannot believe that it was almost 15 years ago.

Still one of the most breathtaking hobby vistas in my book. It is really what got me back into wargaming with renewed focus and energy way back when.

Thanks for your comments gentlemen. JP - can't believe it's so long ago. We must do it again sometime!!!
Hope you are well. All the best. Phil

Stokes - I'm glad it had the impact it did. It's good to have ignited the pilot light that was flickering in many people's hobby heads, and to see the 'old school' (or as I prefer, "Classic") movement gain some traction and momentum back then. Best regards. Phil

The look and feel were absolutely right. Would it work for figures painted to museum standard? No. But it doesn't have to. That is the look I want for my own flat collection. The buildings my grandfather left me are a very good match and it was these games that settled my own ideas so thank you for that. Actually, when I get these damn Galatians done I may very well restart the flat project as a result of this weekend and this post.

Thx Paul. I think it's important to design something that looks right for each project. For me, this is my way of portraying the Charge style of wargaming, whereas for other 18C gaming, I create a very different look with a very different approach. Cheers. Phil

Thanks Phil for posting this. I enjoyed Henry's YouTube cast very much and of course got immense pleasure from the Battlegames articles and blogs at the time of your classic refights. Although as you know I'm a "realism" man my wargaming roots are so firmly in the 60s that even I get misty eyed seeing all this stuff again! You are a constant inspiration.
Chris