Sittangbad Day and other news

Happy Sittangbad Day! 13th September is mentioned as the day the action was fought in Charge, and Blasthof Bridge is 26th September. Presumably the games took place on these dates (I've no reason to make that assertion, or to doubt it, it just seems reasonable to assume!) 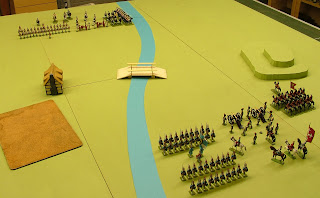 above: Blasthof Bridge, my layout.

So, in the spirit of Classic Wargaming, here's a little competition (no prizes, just for fun). How about sending a battle report on one of these two actions for the next issue of CWJ, and I'll print the best. Max 300 words (yep, just a short one). Any period, any scale... just the original essence of one of the scenarios.
Not that I'm stuck for content. In fact, far from it... I have lots and lots, and so much variety too. Thanks to all the writers of articles, and in particular those who have submitted battle reports on the actions contained in the Pilot Issue. It seems the journal has had the desired effect in some quarters of folks actually dusting down the figures and having a few games. The "Tales from the Frontline" section is building nicely.

I'm delighted with progress on the journal in terms of "sales" aswell. Thanks to all who have supported. We have sent out well over 200 pilot issues, and subscriptions are continually flooding in.
Just a small note: when you do subscribe, please note, the Pilot Issue is not included in the sub... it's a different payment. The subscription kicks in with Vol I issue1, in October. And also, please if you are placing an overseas order, do take care to order the overseas versions, not the UK version.

Finally, I've added a testimonial/ feedback page (see navigation bar above) simply because of all the kind letters and emails received. I felt it was important to share this as it's for the benefit of so many who have helped get the venture off the ground. I just do the stapling! I have replied personally to every letter and email received, and will continue to do so... it just takes a little time that's all and if I don't come back to you immediately, don't despair.

Right, back to editing the next issue, which will be out mid October (I'm aiming at around 15th).
Oh, and don't worry, there's some wargaming and painting going on at this end too. More of which soon.
Phil
Posted by Phil at 22:18 3 comments: