Whilst it is not news that we have recently lost one of the hobby's best-known figures this past week, I thought it would be appropriate to add my own tribute to Stuart Asquith here, following the numerous others that have appeared on the various blogs and forums that make up the online wargaming community.

For many years, like so many others, I had been aware of Stuart, always admiring his writings and his 'take' on the hobby, and especially his editorship of Practical Wargaming. It wasn't until 2007 that I met him for the first time when we did the refight of The Battle of Mollwitz (see the page set aside on this blog for this event).

Following the demo game of Mollwitz, Stuart and I stayed in touch, but it wasn't until 2009 that we met again in person. This was a weekend of wargaming that is pretty well unrivalled... we began with a refight of the battle of Minden, on the 250th anniversary of the battle (1st August), hosted by Charles S Grant at his home in Perthshire. 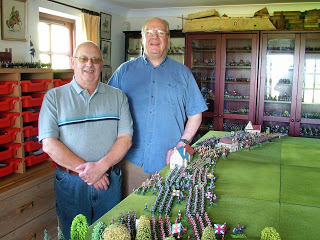 Above: Stuart and Charles with Minden set up in Charles' wargames room, August 2009.

The following day saw us all attend the Claymore Wargaming show in Edinburgh. Then on the Sunday, Stuart and Charles both visited my home for dinner, with their respective wives. Between courses we sneaked off to my wargaming room to peruse the shelves and talk hobby. 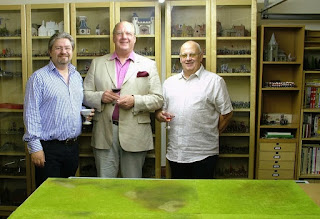 Stuart was good enough to sign a few copies of the many books of his on my shelves, along with some issues of Practical Wargamer.

In the years that followed, Stuart and I maintained a steady correspondence of letters, emails and phone conversations, sometimes of quite some length. Stuart was always ready with a fresh idea, or a point of interest from his vast experience in the hobby. And it wasn't just hobby stuff we discussed. Stuart was so proud of his family and they were always foremost in his mind.

When I began the Classic Wargamer's Journal in 2010, Stuart was in the vanguard of support, submitting articles and encouragement. It was very kind of him to provide material for the fledgling CWJ venture, and it was support that I really appreciated. Notably, in volume 1 issue 1, he was my castaway for the regular feature, Desert Island Wargaming. I was delighted that he agreed to do this, and the article makes very interesting, and revealing reading. I wasn't aware, until that point, of his fixation with the 1066 campaign, or Warrior Miniatures, for example. I may reproduce the article here in due course for those who haven't seen it.
Of course, we all know his primary love in his later years was for the 54mm figure, and Britains in particular.

In my cabinets, I have a few individual figures from wargaming luminaries, and during our years of correspondence, Stuart kindly gave me one of his own... a lovely Stadden hussar officer to add to my collection of sundry officers, ADCs, and the like. 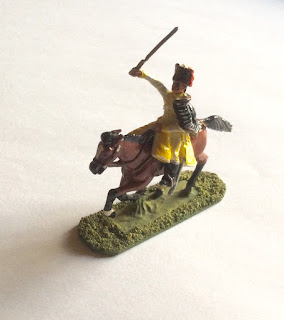 Of course, now in particular, this is a treasured possession.

Stuart often spoke of how he had created a new life for himself and Beryl in the Cotswolds, or "leafy Gloucestershire" as he called it. He was immensely proud of this life, and of the fact that he had time to contribute to the local community. He loved Northleach dearly, and we often mused when I lived in Scotland that one day I would visit and we'd enjoy a lunch at one of the tempting hostelries in the village. That never happened, sadly. However, ironically, I did get to see Stuart only a few weeks ago, in Northleach at the Cotswold Wargames Show, hosted by Keith Flint. A good day was had, and here Stuart is presenting myself and Steve Gill an award during the prize-giving. It was especially important to see Stuart and Steve's acquaintance thrive again as they had corresponded for many years and had met up a lot over that time. 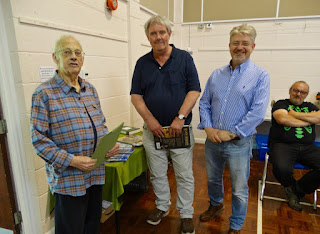 I hadn't really been in touch with Stuart for a couple of years at that point (in fact, we had last spoken at length on the telephone about an article he had had published on wargaming The Back of Beyond, amongst other topics), but I'm so glad we had one last chance to chat over the tabletop at Northleach.

He will be missed by many in the hobby, myself included.

My thoughts and prayers are with his family, and those who were probably closer to him than I.
No longer will "the Emperor and Elector be at odds" on Stuart's wargames table. But up there, somewhere, along with the likes of Featherstone, Grant snr, and Peter Young, there will be a terrific game taking place.