Had the Grand Old Duke of York been a wargamer, he would not only have marched his men to the top of a hill before marching them down again, but he would have also paused at the top, and re-based them before making the futile descent, and then no doubt re-based them again (possibly back to their previous basing arrangement) before making them plod back up the incline, ad infinitum.

When it comes to basing, one of the joys of this Classic Collection project is that such decisions don't have to be made. That is, with the exception of the Pils Holstein regiment who originally were in their unbased form, then got based (twice if I remember correctly) in order to function alongside other armies, but have recently returned to their raw state so as join the other Stadden infantry in this army.

The Grenadier company has always remained unbased, and performed magnificently at Spurlash Down as an independent company. They have now been joined by the other companies, to form a 4-company regiment (Grenadier company, 2 Line companies, Light Company) following the Charge "mixed regiment" organisation structure. 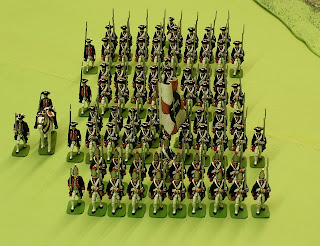 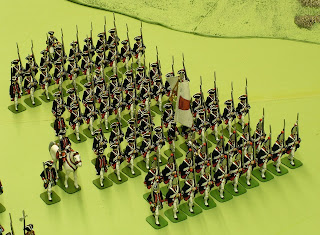 And as a pure indulgence, this has allowed me to set up a long desired shot of "infantry advancing on a broad front", similar to that iconic image of the Electoral infantry at Sittangbad in "Charge". 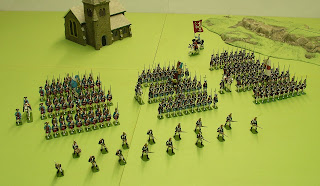 Claymore Report - The Action at Spurlash Down

For those not familiar with the scenario as outlined in the Pilot Issue of CWJ, the action at Spurlash Down is the first in a series of battles in The Blast Valley – a sort of expansion on Blasthof Bridge, that hardy annual of the Classic Wargame.

Under the banner of “The Forth Coalition” (us all being within striking distance of the River Forth in SE Scotland), Alan Gruber (perhaps better known as Tradgardmaster in blog land), Phil Williams, Tony Barratt (a visiting pal) and myself, played out the game at the Claymore show last Saturday. A full report will be in the next issue of the journal, but herewith some photos taken by Phil Williams of the action unfolding. 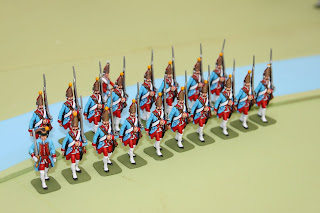 above: A company of The Erbprinz Regt gets its feet wet.
below: an overview of the table as the game progresses 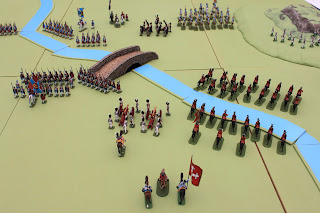 The game seemed very well received, with people recognising the retro nature, and saying things like “it’s straight out of the pages of Charge”, which was most gratifying, for that’s exactly what we wanted to portray. We managed to play the game right through, and with all 4 of us busily nattering to visitors to the table throughout I hope we were able to answer all questions and simply engage with all-comers.

A fun day. And we picked up a little prize for the display, which was very heartening given the number of high quality, “realistic”, diorama style tables on show. It’s good to know that people “got” what we were doing.


Thanks to all who visited the table, stopped by to chat, and buoyed us up!

And thanks for the continuous support of Classic Wargamer's Journal, both in terms of buying the pilot, and subscribing. And for the number of articles and contributions being sent in. All very welcome indeed.
Posted by Phil at 18:56 12 comments: