Taking the organisation of a simplified force laid down previously, now to choose the actual regiments.
Remember first, I am not being straight-jacketed by a specific period or theatre of war, and am happy to mix my units from any in the Horse & Musket era. And, as in Charge, that means being comfortable with the anomaly of Napoleonic RHA taking the field flanked by SYW Grenadiers, and supported by AWI Light Dragoons if need be.
Now, for some, such anomalies may be too much to bear, and in particular for those people not “au fait” with the book, and whose experience of wargaming is confined to the past few years where period accuracy and faithfulness are taken as a given. If you object to such a cavalier approach for your own Classic collection, then feel free to indulge in your own way, and to stick to a specified time-frame, or even to go as far as replicating only Prussians from the years 1757-59 or whatever your chosen personal preference.
Not to labour the point, but for me, it was very much a conscious decision to go with the essence of Charge, and the mildly eccentric approach of having anything I fancied from the “Horse & Musket” period.
So, first, I wanted to replicate certain units from the book, and in particular:
The Erbprinz infantry battalion
RHA batteries (for both sides)
a company of Garde Jaeger Light Infantry 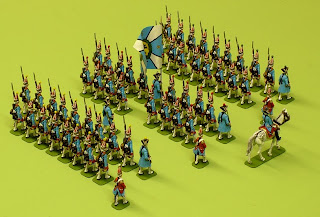 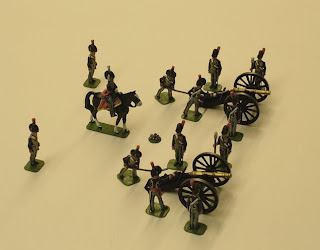 pictures of the Jaegers coming soon... when I've finished painting them!

That left me with a few units to invent and name, all of which will be revealed in due course. Somehow it’s a good feeling to have given your army some sort of character from the unit names even at this early stage.
We’ll come onto replicating the cavalry and my first regiment of horse next time.
Meantime, do continue sharing your army building activities ...
Posted by Phil at 19:28

Phil
Don't forget the Militia organisation option too. Perhaps the smaller number of figures may be attractive to some...
Keep up the inspiration to us all and I am musing upon an eclectic mix of Horse and Musket types not merely restricting to syw...
Alan

I would like to take this opportunity to personally thank you for putting temptation directly in my path. Again. Due to your wonderful new blog, Classic Wargaming, I am making lists of RSM figures, pondering unit names, doodling maps, and generally enjoying myself to no end.

You can share the guilt with Mr. Stokes Schwartz of the Grand Duchy of Stollen (general inspiration, painting) and Mr. "Fitz-Badger" of the Soweiter League (small units, small table) Alas for Mr Badger's lack of a real name! Oh, and Mr Jim Purky of Der Alte Fritz Journal (for showing it can be done, super-sized in multiple periods no less).

Thanks, I say. I thought I had gotten over the stirring sight of row upon row of marching men, three cornered hats askew. I had recovered from dashing hussars in ostentatious uniforms buried in lace. I has sworn off cuirassiers, breast plates as black as the giant horses they rode. Mitred grenadiers! Say no more.

So I read your blog. I printed your suggested starter army. I figured out I cannot deploy it on my 4 x 4 gaming table. Oh, the despair! So I ordered one, just one, full Hussar regiment to comfort myself. It was the only course of action left to me.

Where this will go? I have no idea. Maybe its a journey, not a destination?

The Stadden catalog is full of many wonderful figures that can be used to populate one's army. The SYW hussars in both mirliton and busby, the classic SYW musketeers, grenadiers and fusiliers, the AWI French, the AWI British light dragoons, the Napoleonic Pavlov grenadiers in their mitres, and so on and so forth.

I'm beginning to wonder if my plans to start with small regiments playing other rulesets and gradually building up to 48+ units isn't the wrong approach.
Even if I meant to play charge with my smaller battalions replacing companies, etc...(I had a small; but fruitful discussion on the Old School forum a short while ago on this subject).
But, if I start with large units, I can always devide them in two or three smaller ones to accomodate newer rulesets. All I gave to cater for are some extra command elements.
The units would then be ready for Charge, The Wargame and anything else.
Thanks to Phil's pointers on painting miniatures (sadly deleted now) I think I will be able to manage a larger turn out, seeing the painting as a pleasure, rather than a job to be done.

Okay, that didn't have that much to do with "building forces", ...

Now what I would like to suggest are a couple of closer up pictures of models of different makes next to each other. How does RSM 95 compare to Stadden, Minden, Spencer Smith or Huzzah, etc...I wouldn't mind mixing models from different H&M eras, or of different quality (i.e. level of detail). But I think general size and build are important to collectors. Maybe even mention which models can actually stand alone, and which would need additional bases (thinking of the Grant armies, wasn't it the Spencer Smith Hussar that fell over?). This could be important if one wanted to keep to the "classic unbased look".

Phil
For me, this is a very timely blog! So many thanks for sharing it with us.

As a mid-forty-something gamer who had found he had been losing his wargamng mojo, I have spent the last six months or so re-reading Charge and The Wargame, and then buying/reading the material that Charles Grant and yourself have recently published. All this time I have been wondering how to re-enter the long-lost world of "horse and musket" - I have been considering Malburian, SYW and Napoleonic periods but will probably settle in one of the first two, and most probably SYW.

I have also gradually decided upon The Wargame as my principal set of rules and unit organisation model. To be honest, the Grant/Olley books have done a fine job for the figure makers here - the games look splendid and I aspire to match them! Finding opponents and finding a way to fit a larger table in my wargames room are problems for the future - first to start on the armies! I am planning to make my first purchase (two infantry regiments) shortly, hence the good timing of your blog. It has already made me think a bit more carefully about how to go about the process of building the army.

I confess the single figure basing is a bit of sticking point for me - the practical process of moving large units so based is a bit daunting! Though I take your point about the advantage of having flexibility to then organise for and use Charge or other sets of rules. From what I have seen and read in your Annexation of Chiraz book with Charles Grant, the latter has based his new regiments on multiple bases. I would be interested in your views on how this has worked out.

On the subject of multiple bases, may I point out the pictures of Henry Hyde's units in his Battlegames magazine blog. It was then May 2008 post found here http://battlegames.wordpress.com/category/wars-of-the-faltenian-succession/
I do like the way he retains the old school feel, even with multiple bases.
The question of course being, how would the basing ratios be idealy if you want minimal rule amendments to cater for said basing.
It would be very interesting to learn from more experienced gamers how they see this.

For my SYW troops I am using a core containing a mixture of Revell SYW plastics, Spenser Smith plastics and metals, and RSM95 metals. All of these are 18th century troops. I do, however, have a unit of Hinchliffe Napoleonic Austrian Cuirassiers which I acquired already painted and intend to use as is and a unit of militia in Tyrol-ish hats I may or may not use. I've also got a few AWI figures mixed in with the actual SYW figures.

Great discussion fellas, and I hope to have cleared up some confusion with my new post.

Thanks for all your input. And great to hear I have been guilty (with some notable co-defendants) of getting Jim Wright onto the journey. Good to have you aboard Jim. Let us know how things are progressing as you build your army. And that goes for everyone who is inspired to give it a go.

And similarly for Richard. I hope my latest post will clear things up. Playing Chiraz with multi-based figures required very little adjustment to the rules laid down in The War Game.

Other comments noted, ref some pics of figures from different manufacturers for comparison purposes. In fact, Peter, the Staddens are very big by comparison with the others. And I'll be making some comments on the quality of some of the figures in upcoming posts.

And Alan, thank you for mentioning the Militia organisation. I hadn't really considered a militia unit as part of the standard small army to start with. But there would be no reason not to have one side comprised of militia units, defending their territory against nasty regulars. I'm sure some interestign scenarios could be devised.

Once again, thanks for all your input, and kind words.
Phil